This entry will need to be brief as we are down to two days before the start of the Ha-Ha and there's must left to do.

We departed Morro Bay on 10/1 for Santa Barbara. This was an overnight trip around the much feared
Point Conception.  For us, it was a boring trip and we motored all the way to Channel Islands harbor in Oxnard, but there were tons of dolphins in the morning to keep us entertained.

We spent a few days in Oxnard at the Pacific Corinthian Yacht Club. While we were there, we spent time with Lynn Werner, her son Andy, Andy's wife Lorraine and their brand new baby boy.  On the second day there, a gale came up and blew sand all over everything.  During the gale, Capaz came in from Ventura. We also had dinner with Capaz and Mentorm who had preceeded us into Oxnard.

On 10/6 we headed back upstream to Santa Barbara for two nights.  While there we visited the Santa
Barbara Museum of Art.

On 10/8 we headed out to Santa Cruz Island and had a nice sail in about 20 knots of wind.  As it has turned out, this is the last time we sailed before San Diego.  Once at Sant Cruz Island, we spent the night in a rolly anchorage at Smuggler's Cove, but never made it ashore.

The next morning we headed for Marina Del Rey, where we spent three nights.  The last two nights were at California Yacht Club. While in LA, we visited the fabulous Getty Museum.   I think you could easily spend two or three days going through all the wonderful exhibits.  You can visit their website at http://www.getty.edu. 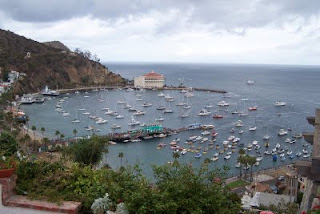 On 10/12, we departed Marina Del Rey for Avalon Harbor on Catalina Island despite strong SW winds and rain in the forecast.   Enroute, we found an "art" guitar floating a few miles offshore near Palos Verdes Point.   Among the items pasted to the guitar was a business card of the owner  (from Venice Beach) and we have since arranged for it's return.  On arrival at Avalon Harbor, we found ourselves moored in close proximity to three other Seattle area boats: Mentor, Bella Marina and Delos.  On the first night, we all had dinner together on Delos.  None of these boats were participating in the Ha-Ha, so they decided to arrange their own event (the "Hee-Hee").

After two nights at Avalon Harbor we departed for Dana Point where we spent two nights. Once again, we connected with Capaz, who was lying in the anchorage when we arrived.

On 10/16, we made an early departure for San Diego, where we are staying in the public moorage at the Shelter Island Police Dock. Our time here has been spent making last minute purchases and modifications to the boat, as boating supplies will be much harder to get going forward.