It's pleasant here, although warm.  But it's comfortable at night and when the wind blows.  The scenery is stunning and the villages and towns are neatly kept.  People have nice midsized 4wd vehicles and some still get around by horse, sometimes at a gallop, smoking a cigarette!  There are goats all over the place too. 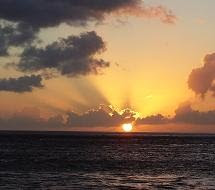 Tahuata a small island between Hiva Oa and Fatu Hiva.  We spent several pleasant days there in the company of Secret Agent Man and Delos from Seattle.  One day, we were towing the dinghy a short distance across smooth tho windy seas, and it flipped, soaking the outboard.  Bill changed the oil a couple times and it ran OK for a while.  But now it's fussy, so he cleaned the carburator.  Now we're trying to figure out how to get a new carb in French Poly. We spent several days at Tahuata before heading down to Fatu Hiva. 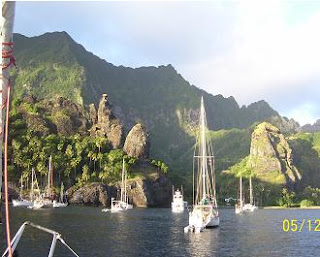 Fatu Hiva is lush with fantastic, or grotesque rock formations.  All the islands are craggy and exotic.
It has very limited transport to the other islands, ant therefore very little in the local store.  So the locals are avid to trade fruit and crafts for just about anything you may have aboard.  Internet is hard to come b y and Fatu Hiva has no internet service whatsoever.  The local teens say they've been given email addresses but have no way to use them.  Kids go to Hiva Oa for lycee (high school).. 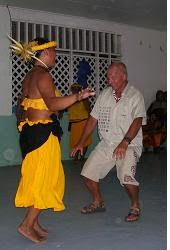 A french friend lined up the local drum and dance troupe to perform.  (will post pictures when possible).  Most of the boats there were European, vs the mainly US and Canadians we run across elsewhere. We spent several days there before heading north to Nuku Hiva.


We often meet up with our Seattle and other US friends, and make other friends easily, so we don't feel isolated.  We spent a night in Controllers Bay nearby.  It was fairly shallow and murky.  At night it was a glwoing, sparkly phosphorescent soup.  It was so cool.  You could see the fish swimming around AND the sharks that feed on them!  There were mostly small hammerheads, with a few regular sharks and rays mixed it.  (Sharks after dark - wow)  We didn't swim there.

We are now in the largest town on Taiohae.  It has wonderful stores and a good veggie market.  The stores are much smaller than Sid's, but they have what we want.  It doesn't rain much, so some islands don't have much water to spare.  They get fuel deliveries by ship, and last week they ran out.  So our friends were here waiting to get fuel.  Usually, you transport it in jerrycans by dinghy back and forth to the boat.  Even tho the bay is calm, there is a surge from the sea, so we're learning to work with that.  Bill has also transported 120+gal of water from various towns that way over the last couple weeks.

It's been interesting monitoring the weather across the south pacific.  It's winter down here, so big storms are brewing south of New Zealand and off Chile that big generate swells that travel here.  Also, weather systems develop south of the Tuamotus.  The dynamics are somewhat different from the north pacific, so it's interesting to learn about that.  Also deciphering the French text weather forecasts took some work.  French radio weather is hard to receive and impossible to understand anyway.
Apae
Posted by s/v Jarana at 8:04 PM