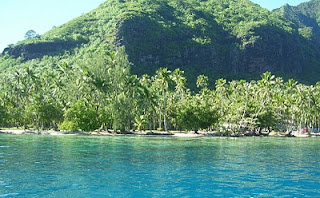 After the Party
As the fleet gradually filtered away, we were drying the boat out and I was feeling better.  The gendarmes dropped by to remind us that we were only allowed to stay a week in the anchorage.  They were quite nice.  Several seemed to be newbies that spent all their time looking over the side of their boat at the clear waters below us.

We dinghied our bikes to the beach, assembled them and biked around Opunohu Bay to explore.  Biking was nice on a quiet two lane road.  Kids were coming home from school and laughed at our funny bikes.

Bill had been interested in continuing his dive certification.  Andrew from Mulan had signed up for classes with a local shop, so we signed on too.  Bill had started his course in Mexico, so I had to catch up by taking the debutant (beginner) classes on my own.  The next day, I had my first dive class since 1975!  Omigod!  They strapped on what felt like 100lbs of armor.  They had to help me stand up and walk backwards with my fins on to the edge of the boat where I was supposed to fall off backwards.  I was terrified!

I later figured out why they had us put our fins on first before donning the rest of the gear.  If you bent over to put on your fins with all that stuff on your back, you'd fall over on and smash your face on the deck. 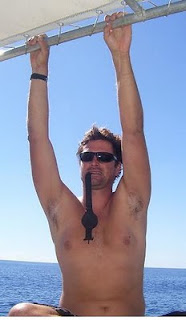 Anyhow, Nicolas, my instructor, was so kind.  After I floundered and huffed and puffed for awhile, he calmed me down.  It seemed to take lots of force to breath via the regulator (mouthpiece).  I knew I wasn't going to die, because I had survived this insanity in the cold dark waters of Puget Sound.  But still, I ain't as young as I used to be.   Nicolas led me around by the hand for the next several dives, even when Bill was along..  We worked with several French dive instructors and they were all really professional.  Also, the French training regime is much more "by the book" than the Mexican courses were that Bill took.