August 13th - We made our way north towards Mt Desert Island, a high, rounded dome of granite, with a long narrow passage into the middle, known as Somes Sound.

It's also a national park.  We found a CCA mooring in Southwest Harbor and got ashore for a short hike and a lobster dinner.  Then we continued north to Winter Harbor on the Schoodic Penninsula, which is also part of the national park.

Both towns were quiet, neat New England towns, with small restaurants and grocery stores.  The national park runs free buses around park areas, so we hopped aboard to see the scenery. 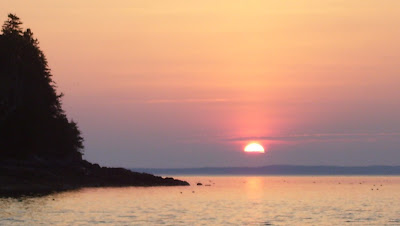 Then the fog was back.  It was really hard to sail through the fog and densely packed lobster pot buoys with toggles (a second float attached by several feet of line.)

One day, we just turned around and went back to our starting point.  Usually, we would get some clearing around midday, especially farther from the ocean.  But nonetheless, we always could find calm, uncrowded anchorages, even near towns.  We were the only boat at Stave Island Harbor nearby.So it was all good.

When we got away from the towns, we often saw eagles and ospreys, among the other seabirds around.