As we sailed up to the anchorage at Isla San Francisco, the wind backed and we had to tack.  A short while later we tacked again and rolled up the jib.  Soon we found a nice spot in the anchorage and shot up head to wind. As the boat coasted to a stop, I dropped the main and Kathy started paying out the anchor.  For the first time on the trip, we had successfully sailed into an anchorage.  It wouldn't be the last time.  Once the boat was cleaned up and seemed to be secure, I jumped in the water, pulled on my swim mask and ducked my head under the water.  My worst fears were confirmed; the Max-prop was completely gone: blades, hub, nut, keeper, everything - completely gone.

Rewind a few days sooner.  While we waited for the dinghy and the canvas work, we kept busy around town.  On Sunday, they held a paella fest where about 14 teams competed for best tasting paella and best presentation.  We felt compelled to help with the taste testing. 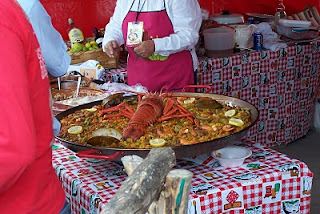 Finally, we received our new hard bottomed dinghy and had mounted the wheels and got it ready for action.  The canvas work finished the next day, so it was time to get out of town for a while.  Our plans were to head north and work our way up to Puerto Escondito then return to La Paz for Christmas.  We got a late start but managed to get into our anchorage on Isla Espiritu Santo before dark.  The next morning we headed North for Isla San Francisco and had a nice sail in about 15 knots of wind.  As we approached the anchorage the wind started going light, so we rolled up the jib and put the engine in gear.  After a few seconds, the engine stopped pushing, surged ahead momentarily, then stopped altogether. I stuck my head down in the bilge and determined that the shaft was still attached and turning (and there were no leaks!), so it had to be a prop problem.  Thus we found ourselves sailing into an anchorage for the first time.

Kathy had an electronic copy of 48 North and found an email address for PYI.  We sent a Sailmail off to PYI and to an importer in San Diego.  Miraculously, everyone answered promptly and by the next morning a new prop was on the way to La Paz.

As the prop would take a week to arrive, we decided to press on, so Friday morning we pulled up the hook and made the short trip up to San Evaristo.  This wasn't a very comfortable anchorage and destinations further North seemed a little out of range without the security of engine propulsion, so after lunch we headed back to Isla San Francisco.  In retrospect this turned out to be a good decision because the wind came up quite a bit over the next two days, and Isla San Francisco was well protected.  We spent the next couple days exploring the Island, cooking up a fish one of the other cruising boats gave us, and having drinks with Dick, Sue and their guests on Mentor one evening.  Below, you can see the new dinghy with the wheels already installed and put to use. 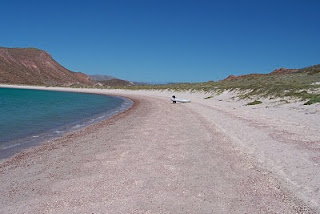 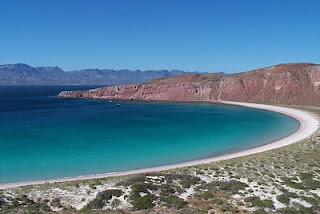 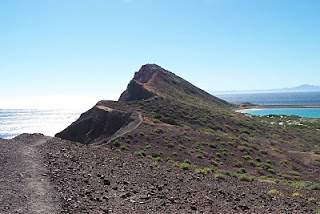 After a total of four nights there, we headed south back to Partida Cove, which lies between Isla Espiritu Santo and Isla Partida.  The wind was light when we sailed off our anchor, but we pressed on anyway, and soon we were on a broad reach in 12 knots of perfect sailing breeze.

The next three nights were spent at Partida Cove, where the wind howled for three days.  Our dinghy, which was hanging from the spinnaker halyard, kept trying to go airborne in the middle of the night.  It took several rounds of adjustments to get it to set still.

Finally, on Thursday the 17th, we sailed back down to the Magote anchorage off of Marina de la Paz.  This was by far the most challenging anchorage as there was 2 knots of current against 10 knots of breeze and there were lots of other boats crowded into the anchorage.  Add to the mix, a big sandbar right down the middle of the anchorage.  In any case, we got the hook set with just enough room to clear the other boats in the anchorage.

The next morning we took the dinghy ashore for coffee at Club Cruceros, and as we were hanging out, I got a call that the prop would be there in 30 minutes. Yahoo!

Shortly thereafter, we had the prop in hand and had made arrangements for a haulout that same day.  We lashed the dinghy to the side of the boat and used it as a tug to get the boat to the yard.

Unfortunately, the tide was going out and there was not a lot of water at the travel lift and we got stuck.  After much pushing and pulling, we got the boat unstuck, but not without a new dent in the side.  We pulled the boat across the way and tied up for the night.  Saturday morning we got an earlier start and the haulout went without a hitch.

The boatyard took care of the damage and installed the prop.  They observed that the original key that held the prop on the shaft was bronze and probably wasn't strong enough.  They made a new key from stainless and got the new prop installed.  I watched every step of the process, as I was nervous about losing another prop, and everything was done to my satisfaction.

Since the tide had dropped quite a bit by the time the work was done, we had to spend the night on the boat in the yard. 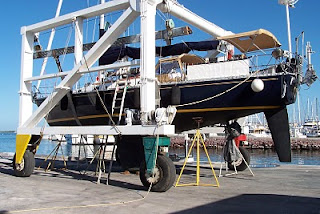 Sunday morning, the yard owner and a couple of their workers came down and launched the boat for us on the next high tide.  Try to get a yard to do that for you in the states!

They let us raft up to a boat in their marina for the night, then Monday morning we moved back to Marina Palmira, where we remained through Christmas.

On Christmas eve, we had a nice dinner out with our friends from Done Dealing and Merry J.  On Christmas day, some cruisers in Marina Palmira had arranged for a tent in front of the marina office, where we and about 40 other cruisers had a nice traditional Christmas dinner with Turkey, Ham and all the trimmings.  We were stuffed, but still had room for dessert.  Yum, Yum.

As I mentioned earlier, there is a sandbar in the middle of the Magote anchorage in La Paz.  To get to the anchorage, you have to follow a long narrow channel from two miles or so to the north.  This poor fellow decided to take a shortcut.  Notice how high the waterline is?  He sat there all of boxing day until the next high tide at four in the morning. 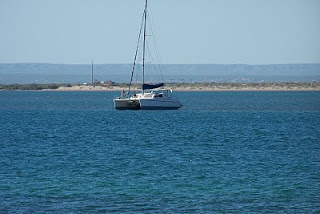 It's now December 28th and it's time to move on. For the first time since leaving Seattle, we are getting rained on, so we're dragging our feet on our departure, but we want to be in Mazatlan for New Years. We'll leave as soon as the rain stops. . . 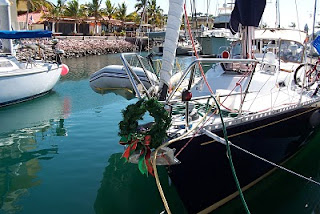