Monday September 6th, (Labor Day in the US),
We took the laundry to the Coconet Cafe/Laundry service. It cost half as much as Bora Bora YC, and smells better! When we started this trip, I never dreamed we'd be able to have our laundry done for us once every month or so. But it's worked out well. It's kind of expensive, but it's infrequent enough, that it doesn't seem significant. (Except Bora Bora which was $50! and didn't come out that good.)

Later in the afternoon we met some French friends at a wine bar owned by a Tongan woman and had a nice evening. They sell mainly New Zealand wines and beer. Later, they showed the _Pulp Fiction_ movie out on their covered patio. They had a projector and screen, and it was pretty neat.

Tuesday, September 7th
A Tongan man approached us in his small boat and we invited him aboard. He requested a cup of coffee and presented his array of carved necklaces, pendants on black cord. He didn't want to trade for fishing lures and the items were expensive. He kept asking about pearls, but e couldn't tell if he was asking if we had any or if we wanted to buy some. We got off that subject, and bought a pendant and he went on his way.  We had lunch in town and shopped at the vegetable market. I paid $5 Tongan for a papaya and when I got it home, I noticed it was marked $2. Nice! I wonder if the vendor will try that again next time.

It was treat that night to meet friends at an expat bar for tacos! Yum. We miss Mexican food. The bars and cafes are mostly on the waterfront with big decks with nice tentlike or fixed covers.

Wednesday, September 8th
We were ready to head out to the islands. We set out for Nuapapu, just a few miles away, to meet our friends on Paikea Mist. They had befriended the teachers at the school there and were going back to fix the school's generator. So we tagged along.
The island has a small wharf on the beach. There are often kids around to help you tie up and escort you around. Or boys swim out to the yachts, sometimes a long ways. After a visit and a snack, we take them back to shore in the dinghy. The islands don't have electricity and most homes don't have generators. So often, just the school and maybe the church have generators. There are aging, solar panels around. We're told Japan is donating new ones.

The school is small: 23 students in two classes: grades 1-3 and 4-6. As with our friends who had previously visited the island's school, we were treated to introductions by the young students in English, telling their names, names of their parents and teacher, what grade they are in and what the want to be when they grow up (nurses, soldiers, police, pilots, engineers and teachers). Interestingly, male teacher's class, several boys wanted to be teachers. Also, the class sang for a few girls to perform a traditional dance. It was really lovely. 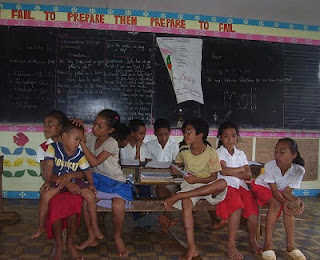 In the 1-3rd grade class, even younger children wander in and out. The schools have single textbooks, so the teachers are very please to receive a laptop and copier for each school so they can prepare materials for their classes. The equipment is donated by Japan. The school buildings were paid for by the European Community.
The teacher lives next door in a modest home. Attendance in primary school is compulsary and free. After 6th grade, those who continue must go to Neifu for high school. High school is not free and a parent or relative must move with the child, since some are just 12 years old. Not all families can afford it.

We have been told that Japan has been asking the International Whaling Commission to permit commercial whaling. Tonga has voted against this, but Japan has been lobbying them to change their position. Hence the aid to schools, apparently. This has inspired the local whale watch businesses to start taking local school kids out to see and appreciate the visiting humpbacks.
----------
radio email processed by SailMail
for information see: http://www.sailmail.com
Posted by s/v Jarana at 2:28 PM