Early on 12 July we left Queen Charlotte City (QCC) for Sandspit Marina to fuel up. The tide was very low (more than 20ft from the high), so the small marina was a forest of tall pilings. Under calm & sunny skies we motored (again) out over the bar. Our first stop was the former Haida village known as Skedans. As we dinghied in, a family of orcas passed between our dinghy and Jarana.

There are numerous totem and morturary poles. (great photos to post later) Each village site has watchmen onsite. When we came ashore, a young couple were baiting large hooks with salmon meat to catch halibut. Nicholas gave us a great tour with much historical explanation. Historically, the two main Haida clans are Eagle and Raven. Nicholas' ancestors were from Skedans, and he knew his grandparents. Many in his greatgrandparents' generation vacated the island villages after a devastating smallpox epidemic in the early 1900s. Most survivors were taken in by the Skidegate village. Many children were sent to the notorious boarding schools far away to be stripped of their native culture and language.

The Haida lived in longhouses. Interestingly, it was traditional for each clan to assemble the houses of the other clan, and they had to be raised in one day. They used logs for posts and beams, and planks for walls, floors and roofs. There are many remaining large poles and beams, but they are swathed in moss, so it's difficult to see the carvings. There are many remaining mortuary poles, tall and thick with cutouts in the top for boxes of remains, all long gone now. Many artifacts and poles have been removed to museums far and wide. Some remains are being repatriated.


The Haida Nation posts watchmen at each village site to protect and explain the remaining artifacts. They are very interesting and give us a warm welcome when we arrive. There were a couple large sailboats that host tourists to visit the area standing off Skedans when we arrived. The watchman sites usually limit the number of concurrent visitors to 12, but so far, it's just been us. 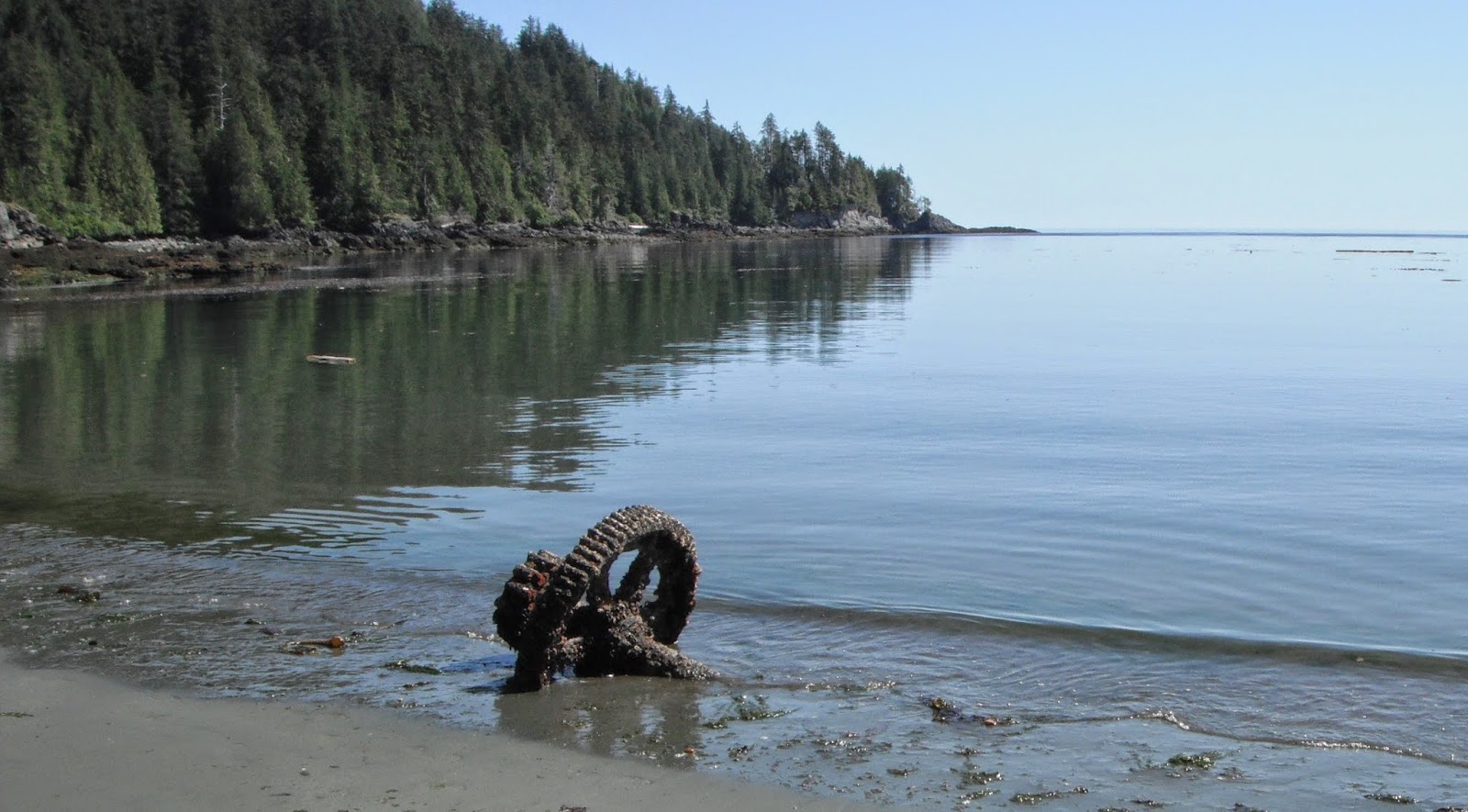 After our visit, we motored a few miles to the Limestone Islands to anchor overnight. We saw a couple kayaks along the shore and a converted fishing boat anchored for the night as well. It was the last time, so far that we've shared an anchorage. Limestone Bay has a lovely long, sandy beach. So the next morning we dinghied ashore for a walk and some exploring. There was a vacant kayak camp with tent platforms, kitchen benches and other conveniences.
Posted by s/v Jarana at 8:40 AM