Goodbye Haida Gwaii, and thanks for the fish

A short weather window of NW winds and clear skies came along on Wednesday morning.  It looked like it would be at least another week before NW winds would appear again so we decided to jump at this opportunity.  As we motored south out of Louscoone Inlet, Bill spotted some big whale spouts backlit by the sun along the shore.  Good.


Unfortunately, soon after that, there were 2 big bangs and a log slid out behind the boat. Bad.   But the prop continued to turn smoothly, so we figured no harm done.  Bill usually keeps a keen eye ahead, but we have the inflated dinghy on the bow and it really interferes with vision of the surface directly ahead of the boat.  It's like having a dinghy strapped to the hood of your car.  Doh!

We continued on.  Soon a pair of humpback whales surfaced perhaps a hundred yards ahead of the boat, passing right to left toward shore.

Half an hour later, a solitary orca appeared off a few hundred yards off to port.

In the meantime, a pair of brown albratross decided to pay us a visit, circling around the boat for an hour or so.  One of them grew tired and touched down on the water.  That was the last we saw of them.  They are known to range across the Pacific from Midway to Moresby Island.  We consider ourselves lucky to see them this close to land.

About two hours after we saw the orca, there was a big thud, not sharp sounding, but it nearly stopped that boat and there was a lot of turbulence in the water.  We think we hit a sleeping whale, but we saw nothing....  Yikes!

It took a while for the wind to fill in and we had protection from the swells and posi-current for a while past the south tip of Graham Island (Cape St James), so it gave us a chance to get our sea legs while making good progress. 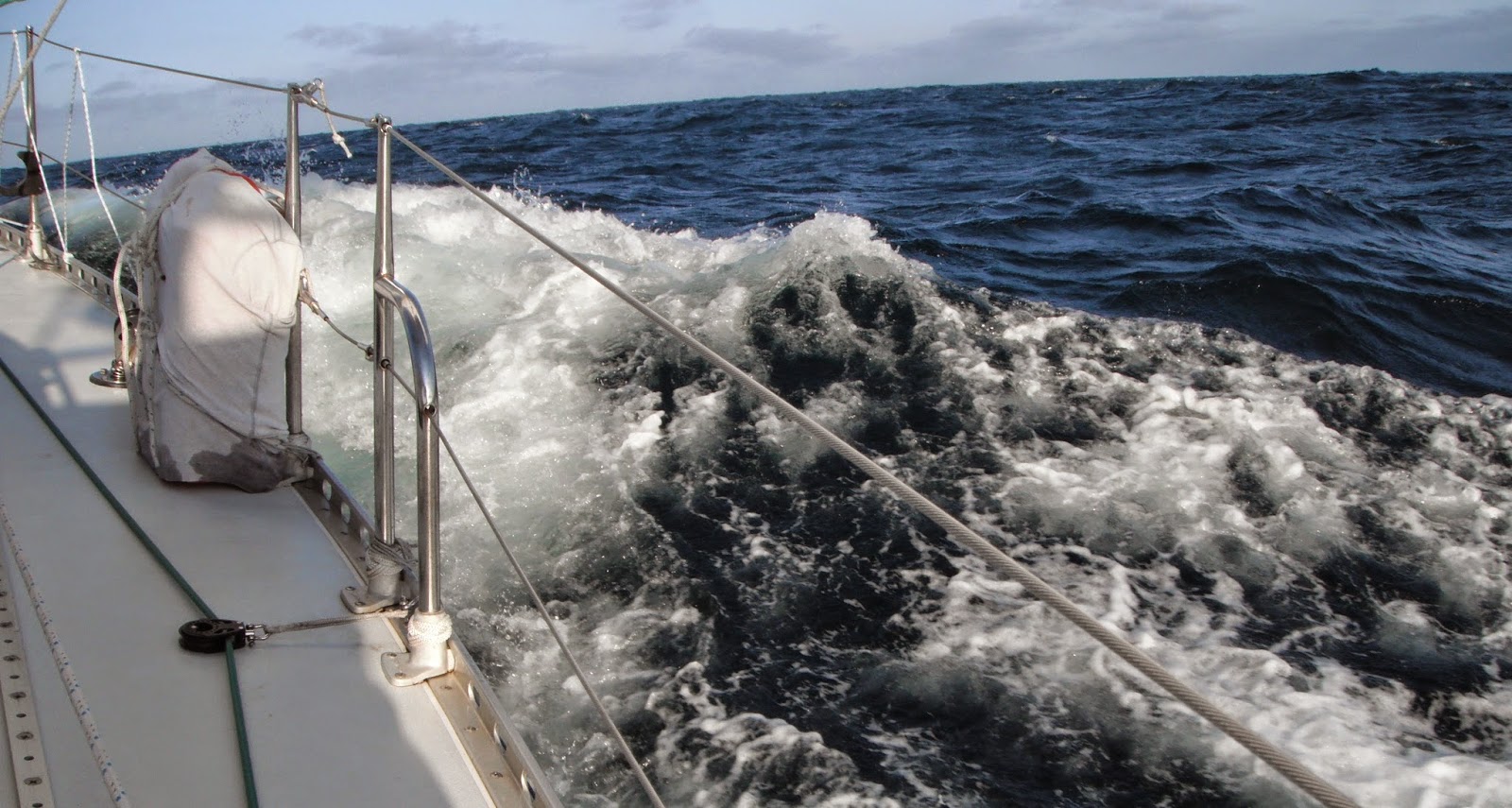 The wind gradually built up into the high teens and we were sailing under nearly cloudless blue skies.  This is as close to trade wind sailing as we will ever get in this part of the world and it was fantastic.

Eventually, we had big seas off the quarter and the wind topped out at 26kts with Jarana under a single reefed main and partly furled jib.  We slid down the waves to the roar of our own surf.  It was a blast, what ocean sailors live for.  Except it's much colder than the trades, so we were bundled up.  Our top speed was 12.6 kts!  Yeee Haaa!

There was no moon and soon clouds covered the stars.  It was almost surreal sailing along in the dark with the whitecaps and boats bow wave phosphorescing brilliantly under the moonless sky.  Fortunately, there is little ship traffic and not so many logs floating around.  Like we saw crossing Hecate Strait, there were thousands of tiny sail jellyfish, blue on the water surface with tiny curved clear sails.  Some came aboard with the spray.  We slid past the SW side of Triangle Island; it's silhouette was just visible in the dark. We gybed back onto starboard to avoid Sartine Island which loomed ahead.  South of Scott Islands (west of Cape Scott), there were a few active commercial fishing boats  but they were well lit and visible on AIS.  As the glow of the morning twilight began the wind began to taper off and by sunrise we were motoring for the last leg of the trip.

Cheated Death, One More Time (just kidding Jean)
After 178 nm, we arrived 1130 on Thursday, at Kains Island light, motoring under light winds and calm seas, and anchored in this calm inlet  to rest and clean up before going to Winter Harbour for fuel and whatever else looks good.  Maybe chat up some thirsty fishermen for a fish..... Sometimes it works.

Damage report:  hardly anything   The house batteries are getting pretty tired, they're 5 years old.  We use a lot of power at night underway for instruments, plotters and lights, so it was the first big test of the batteries for a while and they showed their age.  We're really glad the gooseneck broke in calm Victoria Harbour in midday, and not out on the bounding main at night.

Snafus:  In trying some fancy footwork furling the jib with the pole still attached, we ended up with the topping lift wrapped up in the furler and with Jibsheet Macrame around bow cleats, through chocks and under the dinghy.   It was a chore to undo, in the cramped deck space forward of the dinghy.