I know, I know. We are way past due for an update. We've had a busy few months on the Mexican Riviera and are now on the way to the Marquises Islands. For those tracking our progress, we are no longer in the coverage area for SPOT, but you can track us on YOTREPS at the following link:

He's my stream of consciousness summary of the last few months. In theory, I'll go back and add some pictures to this post when we get to civilization. This is the first of two installments.

Jan 9, 2010
From Mazatlan, we headed South for Isla Isabella. Because of the bad swell in the anchorage, we never got off the boat, but promptly headed south for Chacala the next morning. We spent two nights in Chacala, enjoying the white sand beaches and sea side restaurants before heading south again. We never could find the port captain's office open so we can and went without checking in or out. Other cruisers reported the same experience. 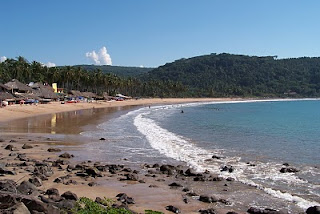 Jan 15th, we arrive in La Cruz de Huanacaxtle on Banderas Bay. Because it's late we decide to spend the night in the anchorage before heading into the marina in the morning. When we tune into the VHF net in the morning, one of the other cruisers reports a water spout out in the bay. We decide to expedite our arrival into the marina. As we're doing this, I take bearings on the water spout and find that they are not changing. Fortunately, it doesn't move either, but more than half the boats in the anchorage end up in the marina. 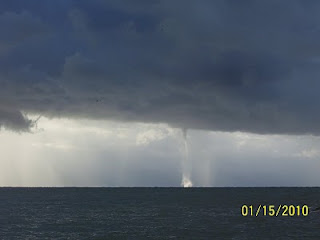 We spend about two weeks in La Cruz, catching up with friends on Pikia Mist, Done Dealing and Merry J and doing the inevitable boat projects.

Jan 28
After two weeks, its time to continue south, so we leave in the afternoon on a nice NW wind and make a fast overnight passage to Chamela. We are joined by Pete, who was skippering the boat next to us in the La Cruz marina.

As we are tired from the passage we spend the day aboard in the anchorage and head south to Tenacatita where we spend a few days. Pete goes ashore here and catches a ride back to La Cruz. Dolphins are swimming among the boats in the anchorage most of the time we are there. 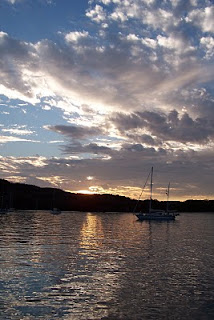 On our second night the weather started turning sour with lots of rain. By the next afternoon, we had 25 knots of wind blowing into the anchorage, so we decide to move over to the La Manzanilla anchorage on the south side of the bay. At about sunset, the thunderstorms start and the lightning is nearly continuous for six hours. I've never seen anything like it. The anchorage is fine until about midnight, when the wind again changes directions and we roll rail to rail all night, so the next morning, we move back to the north side again. It rains for another day. There is no reports of damage in our area, though some boats drug anchor. Up in La Cruz, there we reports of winds up to 88 knots, with lots of damage to boats, with one boat going aground after dragging their anchor. And several boats drug anchor in the Barra Navidad anchorage to the south of us.

Feb 4
The weather's finally cleared up, so we take a dinghy trip up through the mangrove swamp to the back side of the beach just inside the bay. 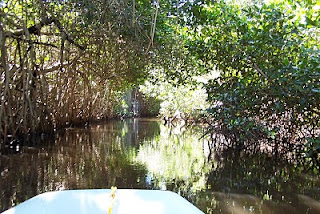 We again head south for the Marina at Barra de Navidad. While we are here, we rent a car and drive back to Puerto Vallarta for the Pacific Puddle Jump kick-off party. A good time was had by all.

Feb 8
Luiz and Anna join us for a week to make the passage south to Ixtapa. For a few pesos, we take the water taxi into Barra de Navidad and enjoy the many restaurant they have to offer. 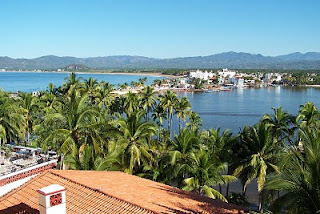 It's a day trip to the anchorage off of Las Hadas on the north side of Manzanillo. This once famous resort now seems tired and run down. Next morning, we take a long bus ride into down town Manzanillo, where I get a Mexican style haircut, complete with straight razor with half a dozen men just hanging out.

Feb 12
We depart early for the overnight passage down to Ixtapa. 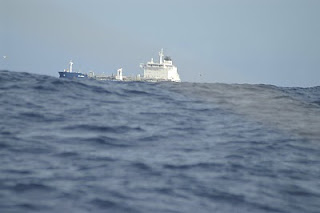 Feb 13
Early afternoon, we arrive at Isla Ixtapa just north of the marina and drop the hook for a swim. This will be our last swim for a while. This is a really nice anchorage, but completely overrun with beach palapas, pangas, jet skis, etc.

After the swim, we head into the marina. After checking in, I return to the boat to find a cocodrilo hanging out next to the boat. We ask the dock attendant if they ever get on the docks, and he says "at times, but they shy away from people". 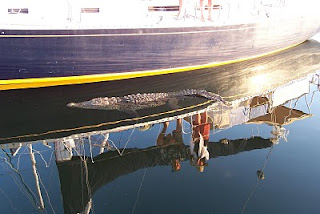 After two nights in Ixtapa, Luiz and Anna head back to the states. I accompany them to the airport to retrieve my new solar panels.

Feb 16
There is a nice park with a bike trail that extends from the marina up to Playa Linda opposite Isla Ixtapa, so we saddle up the bikes and ride out to the end with friends Dick and Cindy on Mentor. We see a few more cocodrilos along the way. 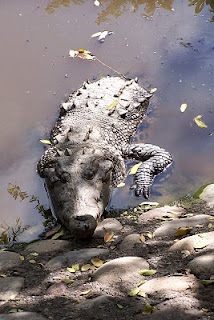 Feb 17
We leave the marina and do the short day trip south to the anchorage in Zihuatenejo where we spend about a week on the hook. Zihua is a nice little town and well worth the time spent. We managed to do a little snorkeling off the reef at Playa Las Gatas, and joined fellow cruisers in various social activities. We also discovered how hard it can be to transfer diesel from a 10 gallon fuel jug to the fuel tanks when the boat is rolling all over the place.

Feb 25
We begin the trek north with a very early departure from Zihuatenejo. Just before sunset, we arrive in Caleta de Campos, where a significant swell is coming in to the anchorage. The are big waves breaking on the beach only a hundred yards or so behind us. We decide not to stay and press on in the morning. It's on this leg of the trip that we first noticed Manta Rays jumping several feet out of the water and landing with a big belly flop. And they seemed to do it in groups. 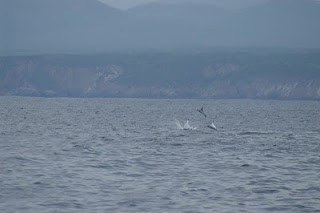 Feb 27
After an overnight passage, we are approaching Manzanillo. On the morning net, there are reports of the big earthquake in Chile and there is a tsunami warning for the Mexican coast. In many anchorages, boats pull up the hook and head for open water. We are still offshore when it passes and reports were of only minor problems. Mostly, there we just strong currents in and out of channels and marinas in the area.

We arrive in Manzanillo bay and decide to anchor off the beach just to the west of Santiago.
The next day on the beach, I spotted a gentleman carrying a harp. Knowing that both the harp and jarana are common to veracruzan music, I decided to follow him. Soon we were introduced to the two man band of Jose y Jose, with the father playing melody on the harp and the son playing rhythm on the jarana. They played a few songs for us and the next day I bought a CD from the son under a bridge.

Mar 2
After three nights in Santiago, we again head north. On the way out of the bay, we stop at Ensenada Carrizal for some snorkeling in the clearest water we've seen so far. When we arrived the was one other boat anchored and absolutely nothing on shore. While we were there, a few other boats arrived.
After lunch aboard, we continue our trek north and soon find ourselves sailing up the cost. As evening approaches, we pull into the anchorage at Melaque. There is some rather unusual music for Mexico coming from a restaurant on the beach. They are featuring artists like Barbara Streisand, Cher and Donna Summers. When we get ashore, we discover a drag show in progress. We hang around until the novelty wore off and headed into town for dinner.

Mar 5
We continue our trek north to Bandaras Bay, but first we have to resolve an issue with the holding tank not draining. It had to be fixed from under the boat. Enough said.
Later that afternoon, we arrive in Tenacatita. We have drinks with a Melanie on Journey, then head over for the famous Friday night dinghy raft up.

Mar 6
We depart Tenacatita with a planned overnight passage to Bandaras Bay. About two hours after dark, we find ourselves faced with ugly seas and a strong wind on the nose. We finally decide to turn around and sail back to Chemala. We are able to follow our GPS track in the dark back to the same spot we had anchored before.

Mar 8
After two night, we make another attempt for Bandaras Bay. We depart at 3 am and power into the wind and chop and are not able to sail until 4 in the afternoon, with La Cruz in sight. We continue on to the La Cruz marina for a few days before we move on to Paradise Village marina in Nuevo Vallarta.
Posted by s/v Jarana at 10:08 AM 2 comments: