We made a short and pleasant overnight passage to Robinson Crusoe Island. The route passes through several reefs.  During the night I was inattentive too long and got a few miles off course, and a few miles too close to one reef.  I corrected course in tim.  But it was a strong reminder to check the plotter often, even when I think I can see where we are.

It's a small  backpackers resort on a small island inside Likuri Harbor on the southwest end of Viti Levu. It sounds remote, but it's close to the busy, big resort section of the big island.  The Robinson Crusoe staff put on a great show on Saturday nights.  It's a jazzed up version of the kava ceremony and singing and dancing that we enjoyed in the villages.  Flaming sticks are part of the act.

Back to Ono Island, Naqara Bay


The wind was changing so we were able to go back to Naqara on the north side of Ono Island, just north of Kadavu.  We wanted to dive the famous Great Astrolave Reef, and we thought we would be able to go to a dive resort up there.

When we arrived in Naqara, several boats we knew were there.  Steve from Dignity is a great organizer and had set up some events with the villagers already.  So after sevu sevu we all enjoyed a meke, an evening of singing, dancing and eating at one of the homes.

The next night, another party was held, same crowd, more kava and even more lively.

Since we enjoyed the Fijians' singing so much, Steve organized the cruisers to perform "Let it Be", by the Beatles.  It was pretty pathetic compared to the Fijians, but they appreciated the attempt.

The weather was a little rough, so we never made it to dive.  Then we both came down with colds, so that really put an end to that plan.

Later, we were able to get in some snorkeling off Paikea Mist, while Gloria, Michael and their kids went scuba diving.

We made another short trip to Kadavu, but our batteries were dying.  They were only 8 months old!!!  Yikes!  So we headed off to Viti Levu instead to solve that problem.
Posted by s/v Jarana at 11:18 PM 1 comment:

Kadavu Island, is a large island just south of Ono Island.  It was only a few miles from Nabouwalu Bay on the west side of Ono to Kavala Bay at the north end of Kadavu Island.  The passage between them is protected by the famous Astrolavbe Reef.

We left Nabouwalu Bay because the wind was predicted to swing around to the west and would send wind and waves into the bay, making it uncomfortable.  So we moved south to Kavala Bay, taking a sheltered anchorage behind a small reef at Kavala Village.  Bill went ashore alone to do sevusevu, as Kathi had a bad cold.  Bill was gone quite a while and had a good time helping drink the kava he brought.  Ironically, Kadavu Island's economy is based on kava farming.

Kavala is one of 60-70 small villages scattered around the shores of Kadavu Island.  The island is steep and mountainous in the middle, and most of the island has no roads.  People get around by boat.  There are a few small resorts as well.  I don't think it has an airport.

The next day, the weekly cargo ship made its stop across the bay from us.  Dozens of small boats came zooming in to meet the ship, unload goods for the local consumers and load up kava to send to the Suva market.  The kava we bought in Suva for sevusevu at Kavala, may have come from Kadavu.

Small boats bring goods and people back to the village.  This boat had a stack of stacks of flour and rice covered with a tarp n the middle of the boat

As you can see from the photos, the weather has been cloudy quite a bit, with showers.  About every couple weeks there's a cycle of rainy weather and shifting winds, then a few sunny days, before cloudy, wet (and pleasantly cool) conditions resume.

We had a terrific sail south to Ono Island.  It was a day passage and we arrived at Nabouwalu Bay in mid-afternoon, in time to get ashore for sevusevu before evening.  Sevusevu is a ritual where visitors present kava to the village chief (ratu) or headman (turaga), requesting permission to visit the village and its surrounding lands and waters.  When we get ashore, somebody comes to meet us and escorts us to the chief or his stand-in.  It's very brief and we usually have a pleasant visit and get acquainted with a few people.  [hmmm, sorry no photos so far]

Fijian homes are sparsely furnished and we usually sit on mats.  Often there are family photos on the wall and that gives a good conversation starter.  It's interesting how many Fijian men have served in the armed forces overseas in either UN peacekeeping assignments or in Iraq or Afghanistan.  In fact once in a while you see a newspaper headline that a Fijin soldier has been killed over there.

Nabouwalu Bay is a particularly beautiful and calm bay. One night however, it was so stormy that the bananas hanging in the cockpit blew off the stock, just leaving some peels... 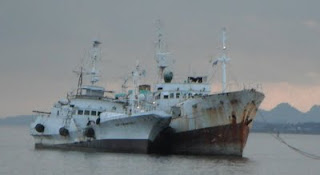 We spent a week in Suva on Fiji's biggest island, Viti Levu.  It's a small city of 200,000, with a busy commercial and fishing port in a large harbor enclosed by a protective reef.  There are several scraps of shipwrecks on the reef that remind us to take extreme care.  Part of the visit involves the ritual of visiting Customs to clear in .  Fiji is has several customs districts, and we have to clear in and out as we move around the country.

Everybody says Suva sucks, but we enjoyed it.  Granted it was a bit noisy.  There are big rusty fishing boats running 1-cylinder generators day and night,  Nearby shipyards and drydocks seem to work around the clock.  But it was interesting and not that loud. 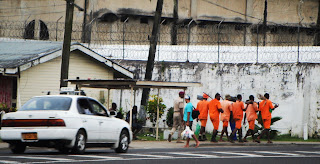 We anchored off the Royal Suva Yacht Club, though scruffy, it's convenient, clean and friendly.  And interestingly, there's a prison across the street.

Suva's central business district is bustling, with department stores and many small shops and restaurants.  And real drugstores!  And coffee shops with good coffee!  We hadn't seen those in months.

We provisioned at the supermarkets and the big, colorful municipal fruit/vegetable/kava/spice and flower market. 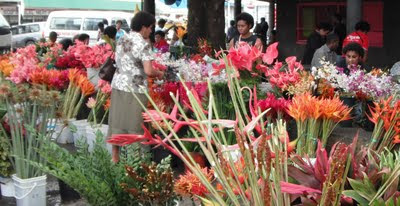 We met some new people around the yacht club: a Finnish family was anchored next to us, a couple from Nanaimo and N Carolina, and Peter from the shipwrecked Troutbridge who was working on his boat,  Then we all went our separate ways....After a week of shopping and internetting, we weighed anchor and set sail for Ono and Kadavu islands to the south.