Reluctantly, we left paradise at Pruth Bay.  It would have been really nice to stay another day, but weather and time said we should move on.  The day was calm, sunny and hot as we motored up Fitzhugh Sound 47 mi to Ocean Falls, an abandoned mill town at the end of Cousins Inlet. 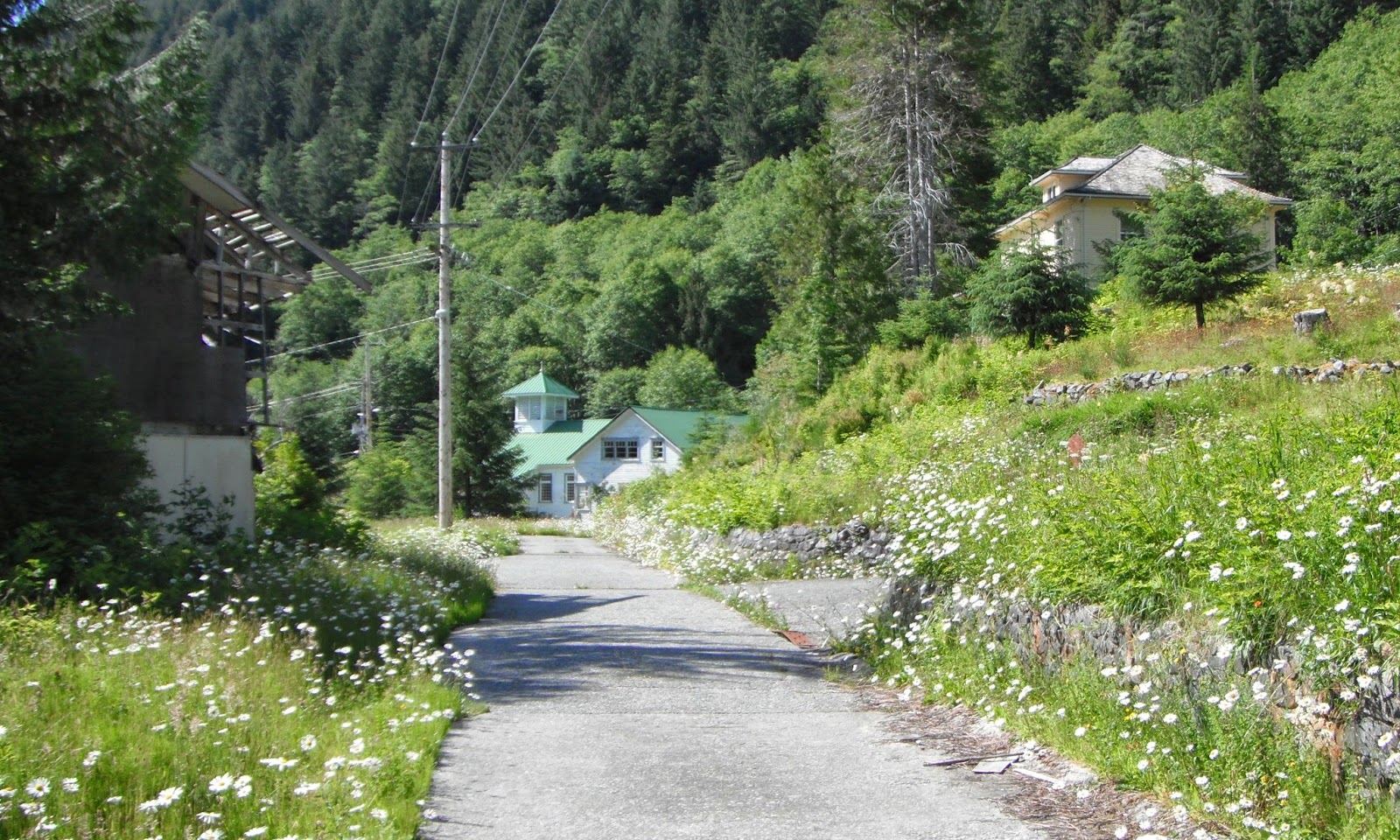 It's a beautiful if sad setting sprinkled with wildflowers around abandoned and collapsing buildings, rusting vehicles a dam and roaring spillway.

There are a few remaining local residences, a small hotel & cafe and a really good public dock with several boats.

The SYC burgee left by our friends on Schatzi and Perseverence still hangs in the dock shack.
The fishing nearby must be good, from the great blackmouth salmon being fileted at the docks fish cleaning station.

A strong inflow wind blew all afternoon as we explored the area.  The inlet is girded by tall stony mountains and the trickle of waterfalls here and there.

June 24th.  Fitz Hugh Sound from Fury Cove to Pruth Bay.  Sunny and light north breeze.  Fitz Hugh Sound is surrounded by majestic mountainous islands on either side, with some large waterfalls. Sunshine and blue skies are pretty, but it's a mighty cold north wind for Bill back at the wheel.

After lots of work, Bill got the dinghy inflated and the outboard motor running so we could get ashore.  The institute allows visiting yachties to use their dinghy dock and walk through their large property to the fabulous beach on the other side of an isthmus.  The sun was shining and small waves lapped the long crescent beach.  It's a stunning setting.

Pruth Bay is at the north end of Calvert Island.  A former upscale fishing resort has been converted into the Hakai Institute for environmental research.  Only one other cruising boat was anchored when we arrived. There are just a few researchers and grad students around outdoors, so it's peaceful.
Hakai Institute-info and photos

Even without leaks, in damp weather condensation accumulates inside the boat.  So today while motoring north, we disassembled the bedding in the fwd cabin and put a heater and a fan on to dry it out.
Up until now, we've mostly had the wind from the south or SE behind us.  But the northerlies seem to be getting established, so it'll be on the nose more often going forward.

Posted by Kathi Cuffel at 11:49 PM No comments:

Northward Bound: Nanaimo to Fury Cove in a nutshell

We've been making good progress and have mostly good weather:

Posted by Kathi Cuffel at 11:17 PM No comments:

We spent a few fun days enjoying the hospitality of Maple Bay Yacht Club with our friends Pam and John Marchant, of sv Passages.  We met in the south Pacific and they shipped their boat from Brisbane Australia to Vancouver. 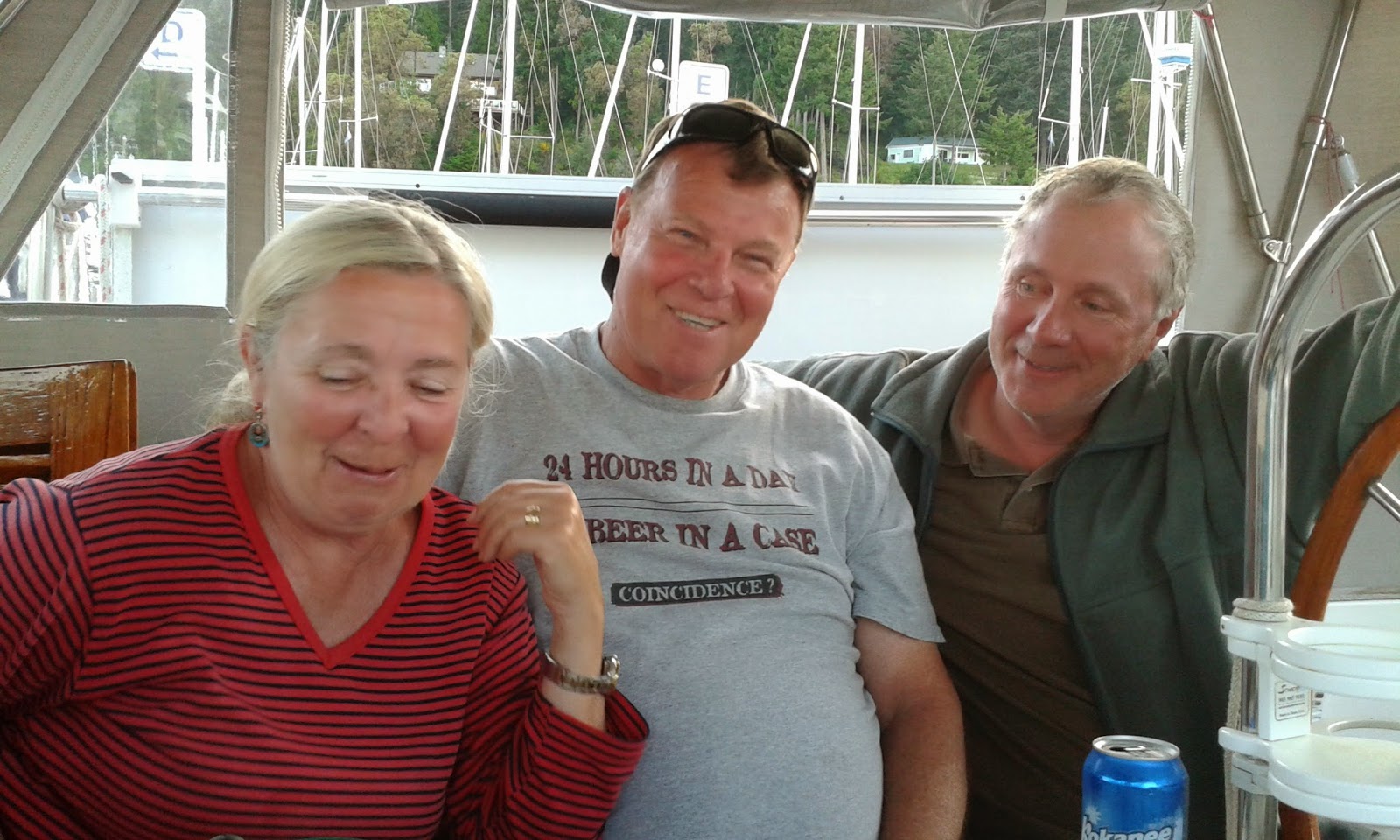 Maple Bay is a beautiful bay tucked in among some steep hills a little ways north of Victoria.

Posted by Kathi Cuffel at 10:02 PM No comments:

Friday the 13th was a good day to leave Friday Harbor.  We topped off the fuel and motored up to Henry Island for a quiet night Saturday.  On Sunday, we cleared Canadian customs at Bedwell Harbour, and made the evening slack water at Dodd Narrows 35miles north.  After a pleasant night on the hook near Newcastle Island, we got a berth at Nanaimo YC.

As we provisioned and prepared to leave, poor Bill came down with a toothache.  So after a quick visit to a local dentist for antibiotics to tide him over, we're continuing north.

Kathi needed to go to Seattle for a few days for a family reunion and a dental appointment, and flying Kenmore Air to Kenmore was the ideal way to travel.


Bill's jeep was stored at Barb & Dan Dougherty's just blocks from the Kenmore Air base, so she was able to walk over and pick it up.

One thing after another.....

Before leaving Seattle, Kathi had ordered a smaller laptop computer to replace her nearly new larger laptop.  The plan was for Bill to take over the nearly new computer for the ship's computer, and retire his really old sluggish one.... How hard could it be?

Of course, the new computer didn't arrive in Seattle until the day after we left....  It could have been shipped to Victoria on the daily Clipper boat, but there some questions about paying Canadian duties....Not!

So on Memorial Day, we departed Victoria Harbour on a sunny, breezy day promising an enjoyable downwind ride to Friday Harbor.... Not!

sigh... While we were still inside the harbor, Bill attached the main halyard and came aft to the cockpit.  There was a bang as the boom dropped onto the dodger, but we didn't think much of it.  (Doh!)  When Bill went forward again to hoist the main, he found the boom portion of the gooseneck broken in half.  (We had done major repairs to the mast portion in Hobart before our long return voyage to Seattle in 2012).  It could have been so much worse:  the sail wasn't up yet, so didn't tear;  we weren't out in the big waves yet, so the boom wasn't flying around creating mayhem, and we had flat conditions for Bill to lash the boom in place.

After much debate, we continued on to Friday Harbor and ordered a new part from Halls Spars.
Kathi had ordered a smaller laptop computer to replace her nearly new larger laptop.  Of course, it didn't arrive in Seattle until the day after we left....  So it was shipped to the SYC Outstation in Friday Harbor instead.

The new computer came on Tuesday and we started setup on the new one and Bill began the looonnnggg migration of software to the nearly new computer.  Two days later the gooseneck toggle arrived and Bill installed it.

We enjoyed our time in Friday Harbor and went to a wonderful Marimba concert Saturday night.
Sunday morning, as we prepared to leave, Bill tried to install some old Sony camera software on the computer....Not!  It totally crashed and corrupted the machine.  So starting all over....We spend a ridiculous amount of time down below in the tunnel-like cabin, shackled to computers.  What a stupid way to cruise.
Posted by s/v Jarana at 2:36 PM No comments: 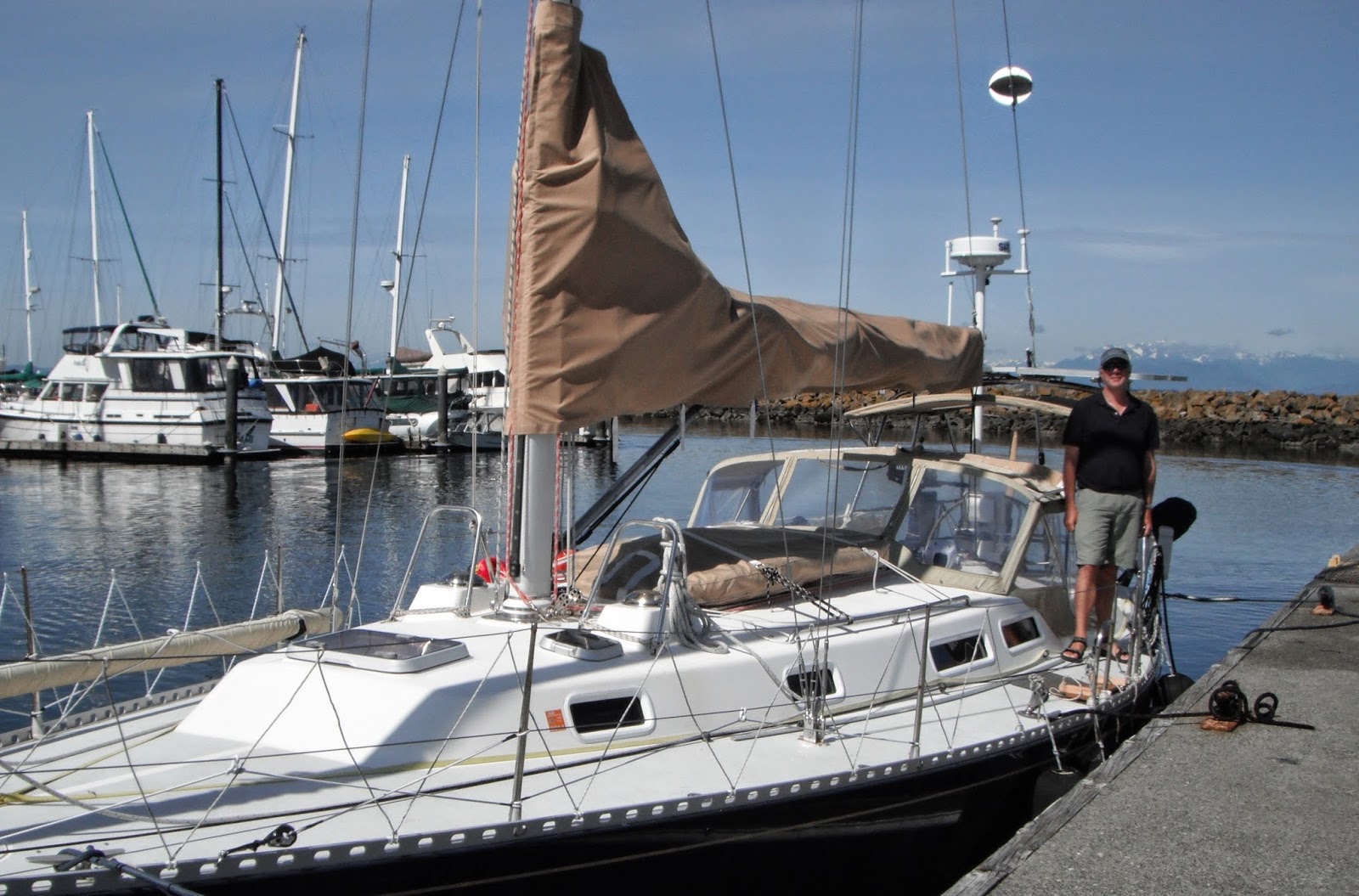 It was a quick motoring trip to Victoria on favorable tides.  With Jarana in a convenient berth at the Wharf St marine in the inner harbor, Bill crewed for our friend Tom Keffer on his J-14 Velocity.  Winds were much better this year than last, and they finished in a respectable middle of the fleet position on Sunday morning