Nuapapu Island, Sept 9th
We went ashore to drop off a thank you note to the classes for their warm reception the day before.  However, school had been dismissed early for a 2 week break.  Back at the wharf a couple boys helped us with our dinghy and just jumped in.  So we brought them out to the boat.  The older boy asked if we had some rice.  After a pause, I realized he just wanted something to eat.  So I fixed them peanut butter sandwiches and gatorade, and gave them each a granola bar.  The younger boy was well dressed, but the older was raggedy, so I have him a beautiful green t-shirt with a big boy scout insignia and dragon on it. They had a good time helping us raise the anchor and Bill ran them back to shore in the dinghy.

We motored across the bay (1/2 mile?) to the wee island of Lape.  It is a very deep spot and a challenge to anchor.  But we managed.  Lape's little jetty was busted up by the last cyclone, so they are raising money by putting on a monthly feast.  The island was lovely and well-tended. The school is even smaller than Nuapapu's, 5 pupils in 4 grades.  But they have a good one-room school house, a dedicated teacher and a beautiful view of the bay. 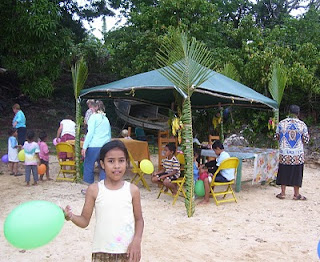 The feast was prepared by the several families on the island and was delicious and well organized.  The men had a kava circle and the children performed a dance accompanied by the older women singing.  There were 35 yachties there, and a good time was had by all.  The feast raised approx $1500, to be matched 3 to 1 by the Canadian government.  (I wonder if the wealthy Tongan royal family is chipping in.)

The next day was really blustery and too rough for snorkeling in the nearby "Coral Garden" site.

Monday, Sept 13th
Monday was calm and sunny, so we sailed the long way round to Hunga Island on the west side of Vava'u. There is a tiny, shallow pass into an enclosed bay from the ocean.  We just barely squeaked through (8.5ft!) before low tide.

Again, the bay is very deep, so you have to nibble around the edge to find a reasonable spot to anchor.  However, it was beautiful and calm and quiet.  No barking dogs, cars, stereos.  Just one old guy paddled up in a canoe to trade for fruit.  He made a killing:  he got 2 cans of Mexican beef and a big pouch of powdered milk.  I got a bunch of green bananas and 2 delicious papayas.

That night we went ashore to the small resort (6-12 guests?) for a delicious dinner.  We chatted with a young British couple on their honeymoon, who had a Sunsail charter.  There's a surprising amount of tide here, and they hadn't secured their dinghy, so it was gone when we came out after dinner.  But no worries.  The bay is almost completely enclosed and the resort fishing guide took them down the beach to retrieve it.  Too bad it was out of gas.  The guide towed them back to their boat.
All this took place in pitch dark, except right in front of the resort.

Tuesday, Sept 14th, Hunga, continued
The next morning was calm, so we dinghied outside the pass into the ocean for a spectacular snorkel.  There was a brisk easterly breeze, but the snorkel site is sheltered from both the east wind and the northerly swell.

The water is cool and very clear.  It seems strange underwater to look to the side and see Bill looking very small, a long ways away.  There were lots of fish and very rugged coral.

We went back to the boat as the weather turned squally, pulled up the anchor and went on our way.  Bill noticed a whale watch boat putting some people in the water and moments later a big humpback swam between them and us.

We arrived at beautiful Ano Beach and Tapana Island and anchored next to our friends on Pylades.   The British honeymooners were anchored on the other side of them.
Posted by s/v Jarana at 1:02 PM