It turns out that most of our stay in San Francisco was spent drying out the boat, but we did have a really nice dinner at the Saint Francis Yacht Club on our last night.  Sausalito has some marine services that are not available in downtown San Francisco, so we headed over there.  We ended up spending more time drying out the boat and continued to fix some of the leaks.  We had a nice dinner with Patt Crocket on our second night (Thanks Patt).  The next night we met a couple (Ellie and Wayne) from Vancouver who had broken their boom on the way down.

We made the short trek over to San Francisco Yacht Club in Tiburon, but there was no room at their guest moorage, so we continued on to Angel Island and tied up to mooring buoys, arriving as the last excursion boats of the day were leaving the docks.  In order to get more boats in tiny Ayala Cove, boaters are expected to tie up to buoys bow and stern.  The is a strong cross current that makes picking up the stern tie a little challenging.  We had a nice dinner aboard and prepared for a morning departure.

We left the bay area in a bit of fog, but it cleared up outside the gate and we had a nice sail down to Half Moon Bay as the wind built to about 20 knots out of the Northwest.  Half Moon Bay offers an anchorage inside an outer breakwater and a marina inside the inner breakwater.  As it was quite breezy in the anchorage, we elected to go into the marina.  There are a few restaurants at the marina, but the main town is quite a hike to the South, and the marina is right on busy highway 1, so it really had little to offer for us other than a place to tie up for the night.

We were faced with a 64 mile passage to Monterey and wanted to arrive in daylight, so we departed early the next morning.  A strong Northwest wind was blowing and we were soon under sail in 15 - 20 knots of breeze (oh, and fog).

We put a new radar and AIS on the boat before the trip, and they have proved their worth on the way down the coast.  We have had some trouble seeing smaller boats until they are really close, but there has never been any question about where the big ships are.

During our trip, we monitored a conversation between the Monterey Coast Guard and a boat in distress who had lost their engine and one of their shrouds had parted.  I had given some thought to going to help until I learned that they were about 50 miles South of us.  We later learned that it had taken Vessel Assist 5 1/2 hours to get to them, and another 7 or 8 hours to tow them back to Monterey.

As the anchorages in Monterey looked quite rolly, we again elected to go into the marina.  I guess at some point, we will need to start sitting on the hook; maybe in Mexico? 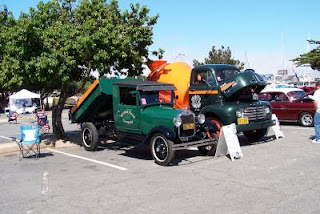 Monterey is a nice little town and we soon realized that our planned two nights wouldn't be enough, so we decided to make it three.  While we were there, the Cherries Jubilee Car Show was going on which offered one of the nicest assemblages of classic cars that I have ever seen.

There is also a nice little Maritime Museum at the harbor that can be seen in one to two hours. 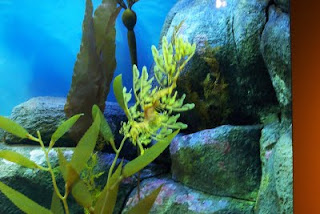 The main attraction is the Monterey Bay Aquarium.  It is divided into two main sections, with the west building featuring "Ocean's Edge" exhibits and the east building featuring "Outer Bay" exhibits.  Some highlights included a sea otter feeding, a kelp forest exhibit, the one million gallon Outer Bay Aquarium, a sea-horse exhibit and a jellyfish exhibit.  This is by far the nicest aquarium I have ever seen, and would highly recommend that you see it.  You can learn more about the aquarium at www.montereybayaquarium.org

Midday Sunday, we departed Monterey for a passage of 107 miles to Morro Bay with warm temperatures under clear blue skies with a promising North Wind.  As we motored up around Pt. Pinos and turned South, the wind tapered off and we were soon enveloped in thick damp fog.  Enough said. 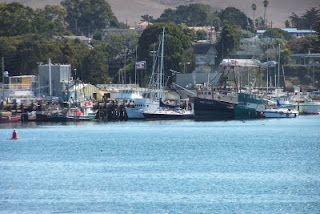 On Monday morning, we arrived in Morro Bay tired after a long passage and tied to a fishing boat at the city pier.  After a nap, we went out and explored the town.  Morro Bay has a lot more to offer than you would guess from looking at the charts or the coast pilot.  There is a large tourist district along the waterfront and a bustling community up the hill, with most everything we need within walking distance. 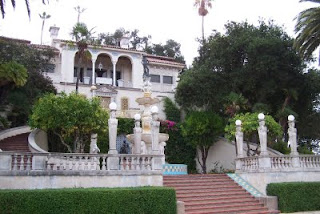 On Tuesday, we arose early and took about a one hour bus up to the Hearst Castle.  Incredible is all I can say.  The amount of art that was collected in incredible.  Any one room would outdo many small museums and there are lots of rooms.  The picture at the right is just the guest house.  You can read more on the web site at www.hearstcastle.org.

We committed to staying in Morro Bay until Thursday as a gale was blowing through Tuesday and Wednesday.

As I sit here updating the blog, we are waiting for the tsunami (from South of Samoa) while listening to wo'pop on KEXP over a poached wifi connection.  The only real concern is that there could be some strong currents in and out of the harbor.  The owner of the fishing boat just came down and doubled up all his mooring lines, but it's the derelicts behind us that I'm worried about.  Add a nice fish dinner and finish it off with a glass of white wine and a piece of Theo Chocolates Nib Brittle, and we're ready.  OK, so the tsunami was a non-event; less than a foot of change and no noticeable change in current.

We departed midday Wednesday for an overnight passage of 133 miles to Channel Islands Harbor in Oxnard.  The weather was nice for a change but winds were light and we motored almost all the way.  Fortunately Point Conception failed to live up to its reputation and we arrived in Morro Bay dry but tired.