We spent 10 days in San Diego preparing for the Baja Ha-Ha cruising rally. It's a record year for entries with nearly 200 registered boats. The rally starts in San Diego with stops in Bahia Tortugas (Turtle Bay) and Bahia Magdelena, ending in Cabo San Lucas. Mark Lincoln rejoined us on 10/24.

We found an economical slip at the San Diego Police Dock. San Diego YC, Silver Gate YC and Southwestern YC provided essential food, drink, showers & wifi. Thanks to Downwind Marine chandlery for their generous support of our fleet and cruisers in general.

After 6 weeks mainly on the boat with few shore side excursions and lots of walking, the freeway and big box store lifestyle of southern California seemed really odd.  People's Coop and Henry's were great for provisioning.  (Henry's carries tetra-pak milk that doesn't require refrigeration before opening.)

Our good friend Lucy Gooding lent Bill her pink bike for local transportation. During a delicious and elegant dinner at her place we did our laundry and rewarded her by flooding her house when the washing machine backed up and overflowed. So the after dinner entertainment was mopping up the water that even crossed through the dinning room. 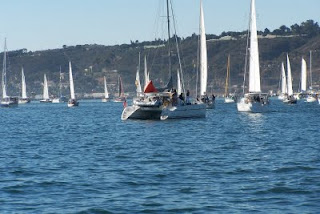 We departed San Diego on 10/26 as part the Baja Ha-Ha boat parade which appeared off the South end of Shelter Island.  This allegedly appeared on San Diego TV and U-Tube. Since the wind was light, it was a running start at 11:00 with everyone motoring at 6 knots. 20 minutes later, the running start ended and everyone (who was paying attention) began sailing.

20-30 knot winds and big seas were forecast for Tuesday, so many boats ducked into San Quintin (the bay, not the prison) to wait it out. We kept on to Turtle Bay to get used to those conditions for our later passages.

We sailed until early evening when the wind went light, then motored until 4:30am Tuesday. By nightfall the wind was in the 20's, gusting to 27 kts and we were blasting along in the moonlight under reefed main and full jib. (Que vida loca!)

We tried the wind vane but it would only work for short periods before we rounded up in the steep waves. We decided to hand steer rather than put in a second reef.

Approaching Cedros Island, we were greeted by a welcoming committee of dolphins. They appeared to have great fun surfing down faces of the large waves next to the boat. They would surf past, then circle around and do it again. I doubt that we will ever get bored with these animals. We also saw a few flying fish and found a few squid on the deck in the morning.

We crossed the finish line at 10:01 Wednesday and sailed all the way to our anchorage at Bahia Tortugas that afternoon where 15 boats were already at anchorage.

Thurs 10/29 - On the HaHa net this morning, we learned that the J-120 "J-World" had been repeatedly rammed by a whale, breaking off their rudder post. (Footnote:  It turned out that this was not true, see later post).  They began taking on water and activated their EPIRB.  A US Coast Guard helicopter picked them off their life raft about two hours later. The boat is presumed to have sunk. The crew is all safe back in San Diego. Mom, skip this part: (Although we would gladly risk injury and death in pursuit of adventure, whatever you do, don't anger the gods, or piss off the whales.)

We are now slipping off the grid with reduced cell phone or internet access.   Until we get a Mexican cell phone and modem in Cabo or La Paz (next week), we'll have even less practical cell and internet access than we found in CA.  So going forward, our main communication with friends will be by sailmail.
----------
radio email processed by SailMail
for information see: http://www.sailmail.com
Posted by s/v Jarana at 11:26 AM