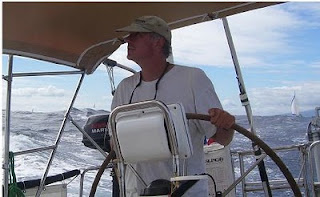 We started the sail ("not a race") to Moorea Saturday morning.  It was warm and breezy leaving the pass from Papeete harbor.  Brian on Further (from Seattle) was the committee boat and a well organized and timed start was made (but it's not a race).  Beyond the wind shadow of the island, the wind and seas really picked up.  It was a boisterous 10 mile reach.

We had a good start and were in the front row most of the way with some cats.  We managed to hold of Delos until the end when they discovered that lowering the mizzen gave them boat speed.  They passed to leeward and tacked to finish between the entrance bouys at the pass to Opunohu Bay.  We took their stern.  Someone remarked later that if it had been a phrf race, we would have won.  We finished eighth, but it wasn't a race.

30-40 boats crowded into the beautiful anchorage in front of a small beachfront park.  Big tents were set up for entertainment and dinner.  (Good thing, becaused it rained cats and dogs the next day).  We had a BBQ dinner and went back to the boat.  I was not feeling tip top.

Sunday, June 20th , Moorea, a tropical deluge.
There were games and outrigger canoe races.  Bill's team, including Jaimie GIfford, distinguished themselves by capsizing the canoe a couple times before the start.  The next team to use it capsized it right at the launch.  Anyhow, they came in 2nd. 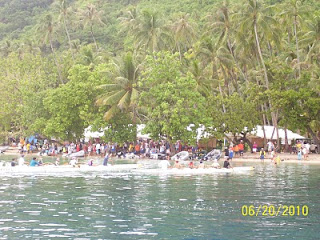 There was a special authentic Tahiitan lunch.  I spent most of the day on the boat, near the little room.  So when I came ashore for lunch, my appetite was not good.  Sad to say, we didn't really take to the Tahitian dishes that were served.

There were several speakers.  One speaker was a wiry Tahitin named Thierry, a local fish expert and guide. He remonstrated us not to feed the fish.  We can lead them around with fish food in containers, but do not feed them!  And don't throw food overboard.  The water here is so clear, it seems terrible to toss anything overboard.