Wed, July 16th - Sac Bay is a bay within a bay (De La Beche), surrounded by rocky hills with some chattering streams and waterfall. We were all by ourselves except for the eagles and seals. Weather was calm and sunny, good for dinghy exploring. And it was warm and private enough we could take showers on deck. Yay! We stayed 2 nights.
52 32.0063 N 131 40.5520 W

Thur, July 17th Hot Springs Island and Marshall Inlet
It was a short jaunt to Hot Springs Island. It has a very tight rocky approach, but there was a mooring that saved us a lot of grief anchoring in the rocks. The watch people included 2 little girls, Jordan and Sinita who took us around the island Unfortunately, an earthquake turned off the hot water to the big pools a couple years ago. So there are only a couple little wading pools near the tide line. One is too hot, the other is too cold. But the girls were delightful. 52 34.4051 N 131 26.5280 W

Fri, July 18th Marshall Inlet to Section Bay
Overnight the wind came up on the west side of the island, and funneled though to our side. The wind was moderate, but was punctuated by big 30 knot gusts blasting through the anchorage and it rained harder than any place we've been on this trip so far. The boat was secure, but kind of noisy. When we left the next morning, we pulled out just the little jib and squirted out into open water like a watermelon seed. Of course, that only lasted a little while, and we were motoring again.

Sat. July 19th Section Bay to Bag Harbour.
Under sunny skies we motored around to Bag Harbour at the south end of Dolomite Narrows. If you check our location on the chart, we went around the long way (east around Burnaby Island). Dolomite Narrows, is very shallow and winding, so it's good to explore by dinghy.
Bag Harbour is big and round with a flat muddy bottom (Anchors love it). And finally, we actually had human company. It was a powerboat from Bellingham. We chatted a bit. They left next day and were replace by kayakers, but we were never close enough to speak....That night Bill cooked a lamb roast on the BBQ. It was really good and made 2 dinners. There were lots of deer grazing on the shoreline here and even more along the shore in Dolomite Narrows. 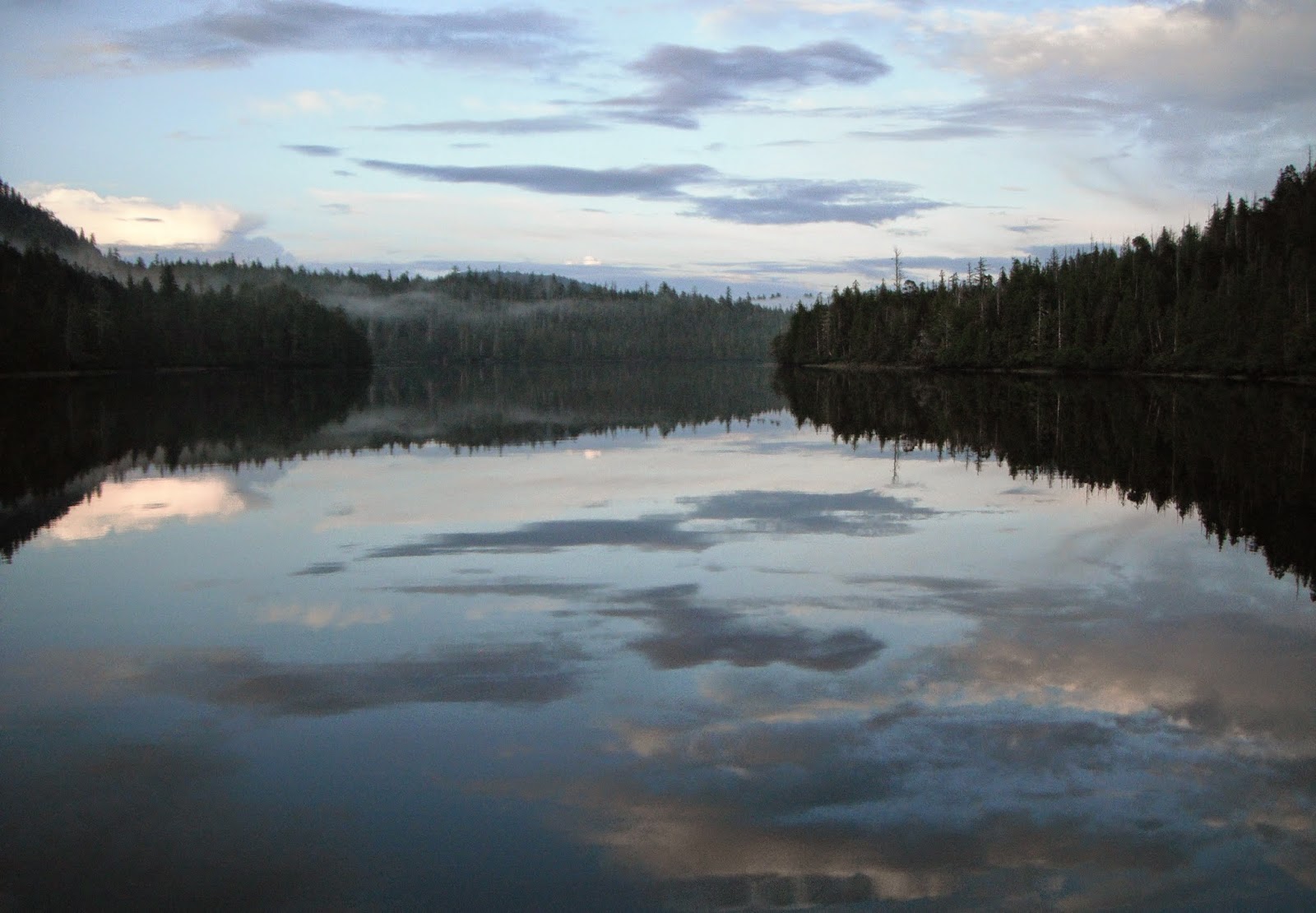 Tues, July 22nd Bag Harbour to S'Gang Gwaii 52 06.1293 N 131 13.5561 W
S'Gang Gwaii is a very special Haida village on a small island at the very southernmost end of the Haida Gwaii archipelago. It's a world heritage site. The totems are kept free of the moss and lichen covering most of the other ones we've seen.

There were lots of other people there, some by kayaks, others in big RIBS (fast launches) and a couple skippered sailboats that take passengers. It was the most people we'd seen and heard since Prince Rupert.

The island is very rocky all around, but there is a great cove on the north side with an available mooring. So we took that.  At the other villages, we have been the only visitors, so followed the watchman/guide around alone. Today we were with several other people, mostly from BC. So that was different for us. 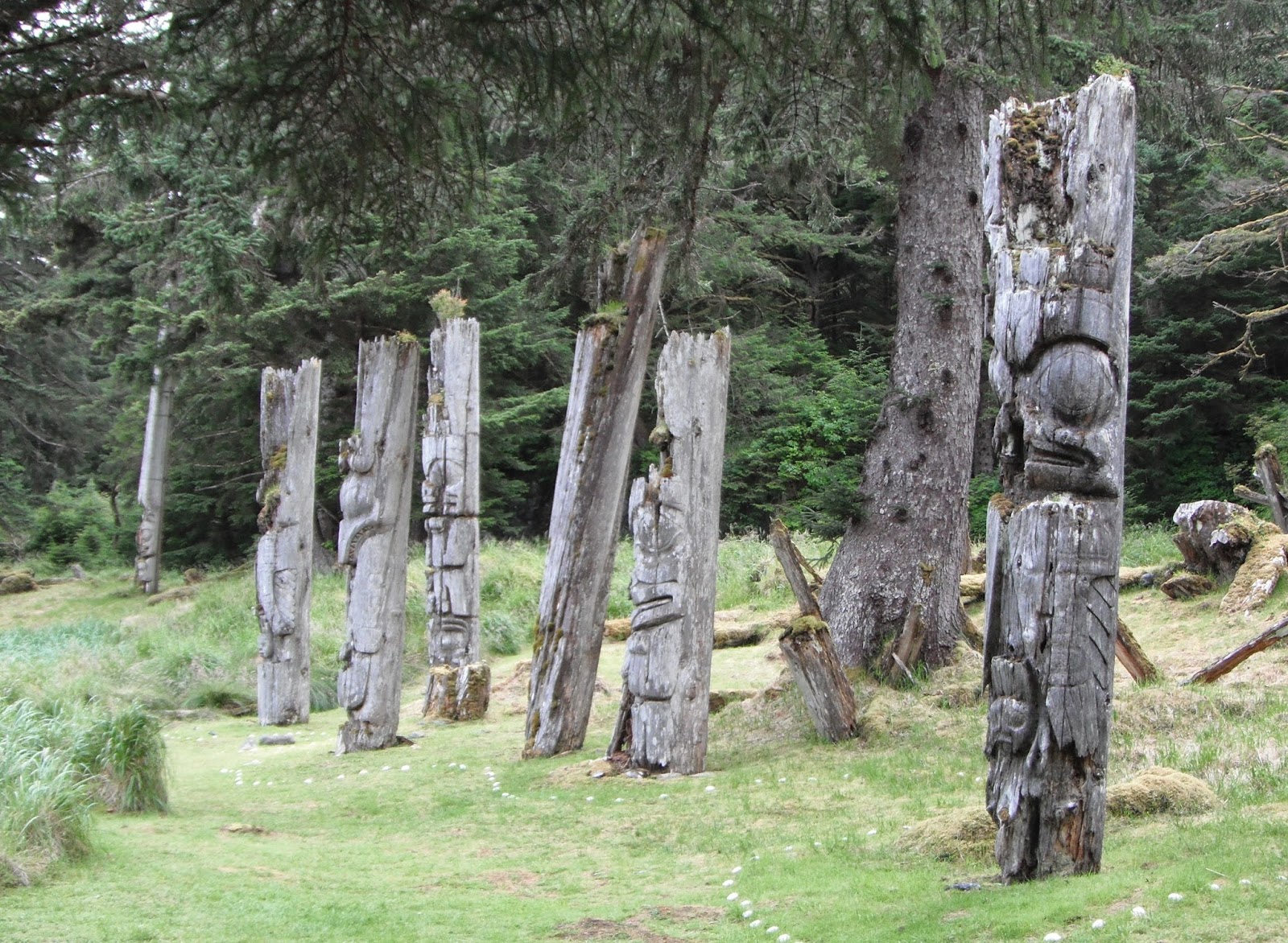 Tonight is our last night in Haida Gwaii. Bill found us a great anchorage in Louscoone Inlet, sunny, calm quiet and alone. (Actually, one of the skippered sailboats is in the next cove, but we can't see them.... We didn't have a fancy dinner as we're preparing for our ocean passage back to Vancouver Island. This involves taking the outboard off the dinghy and stowing the dinghy on deck. Prepping the main for hoisting and stowing all the loose stuff in the cabin so it doesn't fly around. Also I try to prep easy comfort food for the passage.