We started the passage a little sooner than planned because a good weather window came along, meaning SE breezes so we could sail off the wind with the swell from a comfortable angle with a helpful current. (ie, "posi-water" per Liza Tewell).  On July 20th, we departed Canso Village for the 82 nmile passage to Sheet Harbor.  However, it didn't blow hard enough to keep up to our 7kt threshold, so we had to motor as well. which is really tiresome after 8-10 hours.

However, at day's end, we found well protected, quiet, pretty anchorages, so we could relax.  Our charts are accurate and the dangers are well marked, so that reduced our apprehension about entering strange bays on a very rocky coast.  And so far, the Rocna anchor bites the bottom and seems to hang on securely until we're ready to leave.  It's all good. Check out the sv Willie Dawes link, below, lower left for a more detailed description of this challenging coast.

The second day's 62 mile passage brought prodigious rain when we got really soaked. But at least it was fresh water that washed away all the salt.  These were coastal passages, but we were on the  moderate ocean iswells. 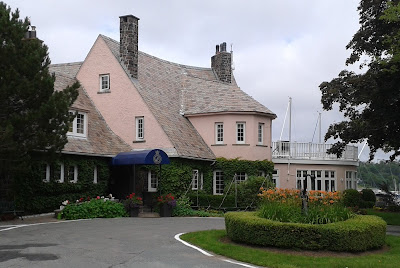 Members and staff were very hospitable and helpful.  Some members are also CCA (Cruising Club of America) members and led to new friendships farther down the road.  We are so appreciative.

We walked over 2 miles to a great marine store.  It was a long way, but we needed the exercise.  Some other customers gave us a ride the short distance to the local shopping center and bus stop, so we could provision. 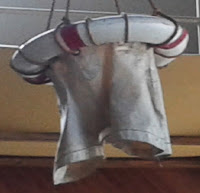 Halifax is a wonderful small city.  We especially enjoyed the Maritime Museum of the Atlantic.

The most unusual exhibit we saw were the "rescue breeches" used to save mariners from ships foundered on the giant sandbar known as Sable Island.  It's thought the island is formed by the confluence of the NE flowing Gulf Stream and the south flowing Labrador current.   It was the site of hundreds of shipwrecks and deaths until modern technology improved navigation. 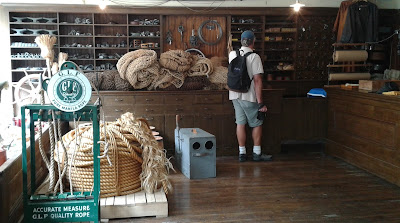 Bill always has to check out the chandlery...