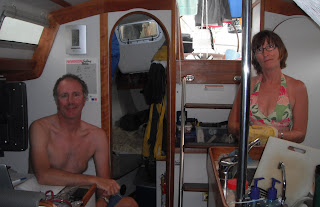 Here's a typical scene from our lives:  Bill at the computer/nav station.  Kathi at the kitchen sink.  (Kathi:  That's not how I pictured my life aboard.)


We arrived in Fiji May 20th making landfall at SavuSavu on the island of Vanua Levu.  You clear in with Quarantine, Agriculture, Immigration and Customs.  A policemen and boat driver came aboard as well.  They are really pleasant people and we see them around town (as we did in the Marquesas), so it's good to get started on a positive note.  The formalities are kind of a nice transition into a new country.

We brought quite a bit of liquor, wine and beer.  The duty on liquor is really high, but not so much on wine and beer.   So we got by with paying $96F (about $58US) to bring in 8 bottles of wine and 2 cases of beer. However, the customs officer is such a delightful woman, you don't mind paying.  It's worth it for the wine.  There's plenty of beer for sale in Fiji.
SavuSavua st is eamy jungle town.  After the exhaustion of the passage, the work needed to dry out the boat and all our possessions before the mildew took over was really draining.  It was just too hot and muggy below, so Mike slept in the cockpit, covered with mosquito netting against the bugs and a shower curtain to keep the rain off.  Kathi just slept under the fan on the settee.  Bill somehow just slept where fell.


We hired a taxi for a trip up to a national park in the mountains.  The island interior is dense jungle and craggy peaks.
Posted by s/v Jarana at 3:48 PM