Thursday July 8th - minor medical adventure
Medical Issue #1:
Hurray! Bill performed surgery on the plotter and it was successful! Yay! I forget what it was. Some corroded something. So no need to order a new one. What a relief.
Medical Issue #2
I had a small medical problem and needed to see a doctor. It was pretty straightforward. I found a clinic in the tour guide, called and got a same day appointment. The doctor seemed to call a new patient every five minutes. That's about how long I saw him. No lab work, he just gave me the rx and sent me on my way. It was $46, probably about the same as a routine US clinic visit. However, an initial visit and lab work is usually more in the US.
In the process I got an rx for Scopolomine for mal de mer. A patch lasts 3 days and works great to start a passage. Cowabunga! It was $72 for 5 patches. (If you get seasick, you'll pay any price to cure it. So I paid it.) Anyhow when I got back to the boat, I found I had more than I had thought, so I guess it wasn't necessary. Doh! I can get them cheap in the US, but I couldn't figure out (or didn't adequately plan) to get them to me here. For short passages, we just take a Meclazine, good for 24 hours. That usually does the trick.
Friday, July 9th - Failure to Launch
I felt lousy most of the next day. I wondered if it was the medication. We were trying to get ready to leave Tahiti for Huahine. We started prepping the boat, and went to Carrefour, the giant grocery store nearby for our final provisions (beer). It was mid-afternoon when we got back to the boat, so were in a big hurry to get fuel and leave. Of course, that's the perfect time to drop a bottle of coke down the companionway, because it explodes and just goes EVERYWHERE.
Launch was scrubbed that day. It gave me more time to divide up the groceries, vacuum pack and freeze things.

Saturday July 10th - Try again
We spent the morning getting more organized. We went to the fuel dock at midday, got fuel and water out of a hose! (vs Bill humping 5-10gal jugs via dinghy to the boat)
Brad and PJ Baker helped us get the boat in and out of tight quarters. We said our good byes, because they leave for Hawaii and Seattle in a few days. We'll REALLY miss them. They and their boys have been terrific on and off traveling companions.
We left Arue around 3pm in a balmy, sunny breeze, hoisted the main with a single reef and sailed a broad reach bareheaded (no jib) overnight to Huahine. Between Tahiti and Moorea the wind was up between 25 and 32kts. On night watches, I listen to audio books on my mp3 player. They're downloaded from Seattle Public Library. I don't always have a good internet connection, but it's well worth the time, effort and wifi cost. Last night, I finished listening to Treasure Island. The version I listened to was read by a good actor who could do the voices and accents of the various characters. Since it's about seafaring adventures, it's really fun to listen to while at sea. Sometimes I get so buried in the story, I forget where I am. I'm often surprised to "come to" and realize how windy it is.
Later that night the wind lightened to 15-18kts, but we just kept the same arrangement, as we didn't want to arrive before daylight. There were other boats around us making the same trip. 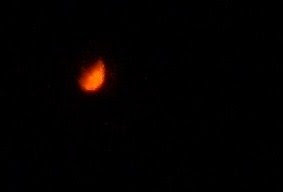 The sun and moon both rose about the same time that morning, creating a solar eclipse an hour or so later. We arrived at Huahine around 730 when the eclipse was starting. We had the special viewing glasses, so we slowly sailed along the west coast of Huahine watching the eclipse. 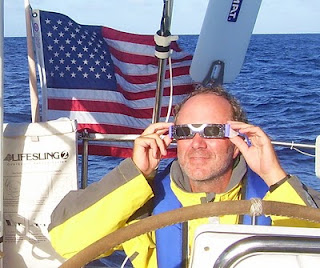 We entered the pass and slowly motored down the west side of the lagoon. On the way we passed Delos, Ghost and Pylades. It seems like we see and hear as many or more familiar boats here as we would on a sunny summer day in Seattle!
We anchored in Avae Bay at the south end of the island around noon. Bill was up most of the night, so he needed to sleep most of the afternoon. I caught a catnap and just enjoyed the bay.